Making the Grade, which will run through the 2019 Belmont Stakes, focuses on the winners or top performers of the key races, usually from the previous weekend, who could have an impact on the Triple Crown. We’ll be taking a close look at impressive winners and evaluating their chances to win classic races based upon ability, running style, connections (owner, trainer, jockey), and pedigree.

This week we take a closer look at Roadster, winner of the $1 million, Grade 1 Santa Anita Derby on April 6 at Santa Anita Park.

Roadster entered the Santa Anita Derby needing a top-two finish to earn enough points to qualify for the Kentucky Derby Presented by Woodford Reserve. Mission accomplished with a half-length win over stablemate Game Winner, the 2018 champion 2-year-old male. With three wins in four starts, Roadster looks like an extremely promising colt with a bright future.

Ability: Hall of Fame trainer Bob Baffert has always been a fan of Roadster – he was the horse Baffert pointed to before he had even raced when asked by TMZ last June who was the heir apparent to 2018 Triple Crown winner Justify – but his path to the starting gate at Churchill Downs on May 4 has not been a straightforward one.

Roadster shined as the 4-5 favorite in his July 29 debut at Del Mar, winning by 4 ½ lengths, but he next finished third at 7-10 odds in the Grade 1 Del Mar Futurity on Sept. 3

After that race is where Roadster’s path to the Kentucky Derby took a detour. Baffert sent Roadster to have throat surgery to correct a breathing problem that played a role in the disappointing Del Mar Futurity finish.

“Roadster is a light horse but always shown brilliance from day one,” Baffert said after the Santa Anita Derby. “We’re just lucky we were able to bring him back … I couldn’t thank the surgeon that did it enough. He’s one of the best in the business.”

In hindsight, losing by two lengths to eventual Sentient Jet Breeders’ Cup Juvenile winner Game Winner, who finished 2018 a perfect 4-for-4 and earned an Eclipse Award, doesn’t look too bad, especially given the circumstances.

Roadster returned nearly six months later in a March 1 allowance race going a mile at Santa Anita Park. He put away the pacesetter with ease and drew clear to a 2 ½-length win under regular rider Mike Smith.

“I’m just so happy with the way he ran,” Smith said after the race. “His mechanics, his breathing, everything was smooth. … In the Del Mar Futurity, he struggled, so they did minor surgery. Today, he was loving it.”

Roadster earned a new career-best 104 Equibase Speed Figure in his return and equaled a career-top 96 Brisnet figure while stretching out to a mile for the first time. That performance gave Baffert the confidence to place Roadster back on the Kentucky Derby trail.

Roadster made his return to graded stakes competition in the Santa Anita Derby needing a big race to move on to the Kentucky Derby.

Roadster was taken farther off the pace compared with his three previous races – he was fifth according to the Equibase chart after three-quarters of a mile but he was actually last of six entering the final turn – but he responded when called upon by Smith and made up considerable ground before the top of the stretch.

Roadster closed powerfully on the outside to draw even with Game Winner and pacesetter Instagrand in the final furlong. Instagrand was no match for Roadster and Game Winner, who battled through the final sixteenth of a mile before Roadster edged away to defeat his stablemate by a half-length.

The winning time for 1 1/8 miles was 1:51.28 and Roadster’s final eighth of a mile was about 12.75 seconds, with neither number especially eye-catching, but keep in mind the main track was playing very slow for the April 6 card.

On the plus side, there have not been any true speed-figure standouts on this year’s Derby trail. And, perhaps the one real concrete fact we know is that Game Winner is a very talented racehorse. Roadster got the better of him in the Santa Anita Derby.

Both horses could improve in their third start of the year. It seems like Game Winner very likely will take a step forward in the Kentucky Derby. The possible outcomes for Roadster, on the other hand, range from a regression for a lightly raced horse coming off a career-best effort all the way to a huge jump to stardom on May 4 at Churchill in a Triple Crown year so far devoid of dazzle.

Running style: Peter Fluor of Speedway Stable, owner of Roadster, said he was surprised and initially concerned by how far back Roadster was in the Santa Anita Derby. He had never been worse than second after a half-mile in any of his first three races, which included a pair of sprints.

“I thought he would’ve been closer to the lead frankly, but it was cool to see him run a different kind of race,” Flour said. “He’s been running second and then accelerating. Today, I’m proud of him for coming from off the pace like that. I wasn’t too thrilled about things halfway through the race, but Mike said he’s got gears and he showed it [in the Santa Anita Derby].”

That versatility could prove extremely beneficial in the Kentucky Derby where jockeys are trying to gauge pace, avoid traffic, and overcome the adversity that comes with a field of 20 3-year-olds racing in front of 150,000 fans.

Roadster’s natural speed should help his chances to navigate a clear trip, and if he does find himself in traffic, the gears Smith referenced will be an asset when attempting to accelerate through an opening. 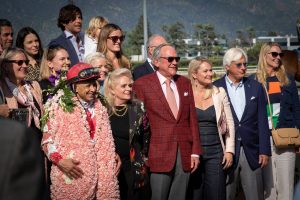 Connections: Speedway Stable is the racing operation of Peter and Ann Fluor and K.C. Weiner. The Fluor and Weiner families have been friends and business associates for more than 60 years. Weiner is the president of Texas Crude Energy and Fluor serves as the company’s chief executive officer.

Robert Fluor and Charles Weiner, K.C. Weiner’s father, partnered in the 1960s to purchase El Rancho Murrieta in Murrieta, Calif., and turned the 160-acre ranch into a commercial racing and breeding operation, a venture that lasted for about 10 years.

Speedway Stables bought its first horse in 2014 and has raced Grade 1 winners Collected, Hard Not to Like, and Noted and Quoted. Collected won eight of 15 starts, including the 2017 TVG Pacific Classic, and earned $2,975,500. He finished second to Gun Runner in the 2017 Breeders’ Cup Classic.

Hall of Fame trainer Bob Baffert and Hall of Fame jockey Mike Smith teamed to sweep the Triple Crown in 2018 with Justify. You’d be hard-pressed to find a more formidable tandem for the Kentucky Derby trail.

Smith is a two-time Eclipse Award winner and the all-time leader with 26 Breeders’ Cup wins. Including the 2018 Triple Crown sweep with Justify, Smith has won seven classic races. He also won the Kentucky Derby in 2005 aboard Giacomo.

Smith also is the regular rider of Omaha Beach, who won a division of the Grade 2 Rebel Stakes and probably will be the favorite for this weekend’s Grade 1 Arkansas Derby. He could have a difficult choice when deciding which horse to ride in the 2019 Kentucky Derby.

Pedigree: Roadster is from the fifth crop of 2009 Florida Derby winner Quality Road, who set a new track record that subsequently has been broken in that 1 1/8-mile race.

Quality Road boasted elite speed and the stamina to carry it a route of ground. He was a graded stakes winner at 6 ½ furlongs and a three-time Grade 1 winner at 1 1/8 miles. He also won the Grade 1 Metropolitan Handicap while earning $2,232,830 with eight victories in 13 career starts.

Roadster is out of the Silver Ghost mare Ghost Dancing, who won five of nine starts all in sprints and closed her career with a victory in the Oakley Stakes on turf at Colonial Downs. In addition to Roadster, Ghost Dancing has produced Grade 1 winner Ascend, by Candy Ride, and Grade 3-placed Moro Tap, by Tapit.

Roadster’s grandam (maternal grandmother), Ransom Dance, by Red Ransom, finished second at 1 1/16 miles but was winless in two starts. In addition to Ghost Dancing, she produced three other stakes-placed winners.

Roadster’s third dam (maternal great-grandmother), Dance Teacher, by Smarten, was a Grade 1 winner at 1 ¼ miles on the main track and a stakes producer in the breeding shed.

Roadster was bred by Arthur Hancock III’s Stone Farm in Kentucky, and Speedway Stable purchased him from Stone Farm for $525,000 at the 2017 Keeneland September yearling auction. Hancock, one of the most respected figures in the horse industry, co-bred Kentucky Derby winners Gato del Sol and Fusaichi Pegasus and was co-owner of the legendary Hall of Famer Sunday Silence, 1989’s Kentucky Derby and Preakness winner and Horse of the Year.

I’m not sure if 1 ¼ miles will end up being Roadster’s ideal distance, but he sure looked good stretching out to 1 1/8 miles, and his pedigree makes me more likely to feel confident in his chances on May 4 at Churchill Downs.

I do think there are legitimate concerns about whether he is fast enough from a speed-figure perspective and about his foundation with only two starts after a long layoff. Bob Baffert has proved a master when it comes to preparing 3-year-olds for the Kentucky Derby, but if Roadster winds up being the race-time favorite I’d have a hard time taking a short price on a contender with some valid concerns.