Stone Farm's Hancock Back in the Derby with Roadster

Stone Farm’s Hancock Back in the Derby with Roadster
Arthur Hancock III has bred two Kentucky Derby winners and owned and raised a third.
Courtesy of the BloodHorse
By Eric Mitchell
Stone Farm owner Arthur Hancock III scanned the list of potential mates for his mare Ghost Dancing prior to the 2015 breeding season and stopped at Quality Road .

The mare, a grand-looking gray daughter of Silver Ghost, was a product of Edward P. “Ned” Evans’ prominent breeding program in Virginia. Hancock acquired Ghost Dancing for $220,000 out of a dispersal of Evans’ stock at the 2011 Keeneland November Breeding Stock Sale. Evans, the son of prominent owner/breeder Thomas Mellon Evans, died Dec. 31, 2010, from acute myeloid leukemia.

“Ned was very smart, and he really loved breeding, an exceptionally brilliant guy,” Hancock said. “I had a lot of faith in what he’d put together, and I wanted to buy something from him because he was a good friend.”

Quality Road also was bred and raced by Evans. The son of Elusive Quality won four grade 1 stakes, set two track records, and earned $2,232,830 for Evans, who thought so highly of the horse he refused to syndicate him and retained full ownership when he retired Quality Road to stud.

“I remember going over the breeding list and thinking, ‘Well, Ned bred Quality Road, so this is Ned’s breeding through and through,'” Hancock recalled. “I thought I would honor Ned by breeding her to his stallion. I believe Ned would have done the same thing.”

Aside from the personal connection, Hancock said the mating had plenty to recommend it. Primarily, the cross of Quality Road with Ghost Dancing’s family had already produced Hootenanny , winner of the 2014 Breeders’ Cup Juvenile Turf (G1T) and the Windsor Castle Stakes at Royal Ascot earlier that year. Ghost Dancing’s second dam and Hootenanny’s third dam is top-level winner Dance Teacher, by Smarten. Dance Teacher, an Evans homebred, won the Ladies Handicap (G1) at Aqueduct Racetrack and the Gallorette Handicap (G3T) at Pimlico Race Course, both in 1989.

Hancock also liked the mating to Quality Road because it provided 4×3 inbreeding to Mr. Prospector and brought together four lines of Native Dancer, an ancestor who figured prominently in Hancock’s decision to buy Ghost Dancing.

“I can still remember seeing her out there at the sale. It was one morning and the sun was out, and I was looking at another mare when I saw (Ghost Dancing) standing out there, too. I just thought she was a beautiful mare,” Hancock said. “I liked that she was by Silver Ghost, who goes back to Native Dancer through Mr. Prospector, and then his dam, Misty Gallore, goes back through Flight Dancer to Native Dancer. She is gray, so I thought she had the Native Dancer genes. That is probably a fool’s conclusion.”

Hancock admittedly has an affinity for grays. The first of two Kentucky Derby (G1) winners he’s bred, Gato Del Sol in 1982, was gray, as was his dam, Peacefully, a stakes winner raced by Hancock with Leone Peters.

“I have had some good luck with grays. I think there is something to grays, but you get a lot of a crazy theories,” he said.

The mating of Quality Road and Ghost Dancing resulted in a handsome gray colt named Roadster, whom Hancock sold for $525,000 at the 2017 Keeneland September Yearling Sale to Peter Fluor and K.C. Weiner’s Speedway Stable. The price reflected not just Roadster’s quality as an individual but also the deep quality of the family.

In the summer of that year, Roadster’s half brother Ascend won the Woodford Reserve Manhattan Stakes (G1T) at Belmont Park for Stone Farm in partnership with Sol Kumin’s Madaket Stables. The gray Candy Ride gelding was the foal Ghost Dancing was carrying when Hancock bought the mare at Keeneland. Ghost Dancing is expecting a foal by Candy Ride this month and will be bred back to Quality Road. 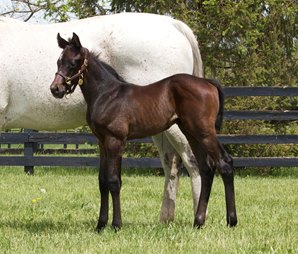 Roadster as a foal at Stone Farm

With trainer Bob Baffert, Roadster broke his maiden by 4 1/4 lengths at first asking at Del Mar in late July of his 2-year-old year. In his second start, he finished third in the Del Mar Futurity (G1), two lengths behind the winner and future champion Game Winner.

Roadster debuted this year in a March 1 optional-claiming allowance race at Santa Anita Park that he won by 2 1/2 lengths. On April 6, the colt stamped his ticket to Louisville with a deep stretch drive in the Santa Anita Derby (G1) that delivered a half-length win over Game Winner.

“I thought he was out of it on the far turn. I figured he was done, that something was bothering him,” Hancock said, referring to Roadster falling back toward the back of the field as they headed into the final turn. “And then he took off. I mean, he is an inexperienced horse and he’s running against Game Winner, the champion 2-year-old. That was a big race, to do something like that.”

A veteran of the springtime trek to Churchill Downs’ most important race, Hancock knows well the ridges and valleys of the terrain.

He had his first Kentucky Derby starter in 1981 with Tap Shoes, a homebred son of Riva Ridge that Hancock campaigned and co-bred with Leone Peters. The colt was fourth choice in the betting, having won the Futurity Stakes (G1), Hopeful Stakes (G1), and the Sanford Stakes (G2) at 2, and came into the Derby off a win in the Flamingo Stakes (G1) at Hialeah Park. Trainer Horatio Luro used a rubber band to tie the colt’s tongue at the Derby and the band broke, forcing him to tie it back with a piece cloth. The horse got mad, slung his head around in aggravation, and ran poorly. Tap Shoes finished 14th out of 21 starters.

“I was despondent, distraught, and depressed after that,” Hancock recalled. “The next year, though, Gato Del Sol won it for us.”

So here is Hancock on the Derby trail again, the owner and breeder of a live contender. After he sold Roadster, Fluor and Weiner offered him the chance to stay in, which he did at 10%.

“I’ve never felt better about any chances,” Hancock said about Roadster’s Derby potential May 4. “It is a long way from here to May, but if everything goes right, if he has a good trip, I just think he is one heck of a good horse. He is bred to go a mile and a quarter or a mile and a half. Ascend did it. Quality Road did it.

“Now we just hold our breath and hope,” he added. “I honestly could not feel better.”