Forever Together, No Matter What, Arthur Hancock IV and a Visit to Stone Farm

There is a comfort to a traditional horse farm, the type that lacks bells and whistles and chandeliers. The moment you step onto Stone Farm, with its touches accented with grey and yellow, you feel as if you’ve stepped back in time. The farm’s simple motto: “We’re trying to raise you a good horse.”

When I visited last week with a friend, Arthur Hancock III and his son Arthur met us in the office. The older Arthur, who created the farm in 1970, is known far and wide not only for his horsemanship but also for his gift for storytelling. It didn’t take much goading for him to share a few tales of immortal horses he’d known such as Forli, Buckpasser, and a bold foal who grew up to be Fusaichi Pegasus.

He also discussed the farm’s method of introducing maiden mares to their new life as broodmares. Before maiden or barren mares are put together in a field, they are placed in stalls across from each other so they can ‘talk.’ Then they are put out together and eventually moved into fields with more mares.

We could have listened all day, but there were horses to see – two of George Strawbridge’s most accomplished mares. I’m a big fan of Mr. Strawbridge’s breeding program and have been honored to photograph some of his best mares, primarily at Derry Meeting Farm – including Annie Edge, First Approach, Reiko, Heartbreak, a cantankerous and amazing mare named Waya….

On this day, young Arthur was kind enough to assist us with No Matter What and Forever Together.

Broodmares are fascinating, although many people barely notice their names. A sire’s name is bandied about regularly. Handicappers talk knowingly about the brilliance of Elusive Qualitys or the ability of Broad Brushes to get a distance. But most mares seem mere words, in small font, listed after the stallions in programs and past performances.

Everything about No Matter What should be bold-faced. Bred by Arthur Hancock III and Stonerside Ltd., the daughter of Nureyev – Words of War won the Grade I Del Mar Oaks and a listed French stakes, while earning $185,726.  But No Matter What’s Grade I racing career was just a prelude. Now 13, she has already produced three stakes winners: millionaire Rainbow View (G1), Just as Well (G1) and Winter View (multiple graded stakes winner).

All of those Grade Is have seemingly left her difficult to impress. The farm staff had No Matter What beautifully prepared, and even her hooves were scrubbed clean. Her rounded body reflected a broodmare in foal, and her lovely feminine features were softened beneath a bright red winter coat. Her class and beauty were readily evident as they stood her up for a portrait.

But while she was very polite, she was as difficult to photograph as any I remember. It was nearly impossible to get her ears forward, although we tried everything we could imagine. No dice. In perhaps 15 minutes, she pivoted both ears forward only twice – and for only the briefest time. Usually, one ear – or both – stayed back.

We finally gave up and let her back into her paddock. With that, her ears propped forward and, with a light step, she eagerly jogged back to her paddock-mates. Soon joined by a dark bay friend, she burst into a relaxed gallop, and they quickly disappeared over the horizon.

Broodmare manager Jerry Hobbs, who has worked with No Matter What for several years, said of her lack of interest: “She’s a well-mannered horse, and it’s a pleasure taking care of her. But she just likes to eat and be with her friends.” 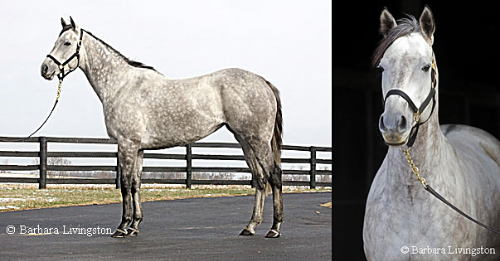 Forever Together, meanwhile, had been at the farm only a few weeks, having retired after the Breeders’ Cup. She and her new paddock friend, Extravaganza, were waiting in the barn. Forever Together was led out, and she was comfortable and responsive for portraits. Her 6-year-old body still shouted ‘racehorse,’ and her dapples and points were still rich and dark.

After formal shots, the assistant broodmare foreman Joey Littrell led Forever Together to an expansive paddock, while young Arthur partnered with Extravaganza.

I’d visited Forever Together nearly a year ago at Jonathan Sheppard’s Pennsylvania farm and been fascinated by how she clearly ruled her paddock. Informed Decision and two other paddock mates paid heed whenever she approached for, while she seemed innocent enough, she might suddenly pin her ears and pivot her powerful hind end their way. No one debated her superiority, at least the day I was there.

But such was not the case at Stone Farm. Extravaganza obviously had not read about Forever Together’s Breeders’ Cup victory, Eclipse Award or reputation for being quirky, or perhaps she simply felt her pedigree and record – the daughter of Elusive Quality had won at Keeneland in April – were worthy of respect.

When released together, they moved gingerly around the snow-crusted field, each carefully striding out on the slick footing. Forever Together occasionally pinned her ears, tossed her head and swung her hips toward the young bay. Extravaganza? She pinned her ears and offered her own backside, without ever really trying to connect.

When Forever Together couldn’t intimidate the filly, she instead approached me with mischief in her eyes. I waved my white flag immediately and backed away.

The mares quickly made peace and settled in to graze, and as they wandered around the large paddock seeking out the best browse, they stayed close to each other – like best buds. Fascinating animals. Blessed are the broodmares, indeed.

Despite the cold morning, the tall young Arthur helped with an unusually positive attitude and good nature. His handsome features, from sandy light hair to blue eyes to a strong jaw line, were nearly obscured beneath a large knit black hat. But his smile, showing clearly how he loved working on his family’s farm, was enviable. 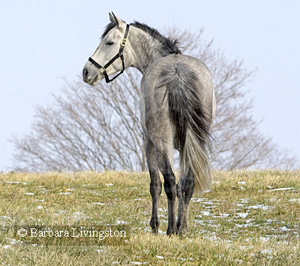 Arthur, 24, is one of six children, and the only son, of Arthur III and his delightful wife Staci. Gato Del Sol won the Kentucky Derby three years before Arthur IV was born, and he was too young to remember Sunday Silence in 1989. He remembers crying when Menifee got beat in the 1999 Kentucky Derby, falling a head short in his drive to catch Charismatic. And he remembers, with laughter, the day a yearling bred by Stone Farm and Stonerside, later named Fusaichi Pegasus, sold at auction for $4 million.

“I remember sitting in the front row with a bunch of my friends, and freaking out when they hit $2 million and kept going,” he said. “I obviously didn’t appreciate it as much as I do now. I wish we could do it again, because now I understand the significance of it.”

He does seem to understand the significance of things in a manner belying his youth. But then again, his childhood was anything but ordinary.

“I think I was nine years old when I broke my arm in the foaling barn,” he said. “A mare started to foal and I ran to call someone, and I tripped over a chair and broke my arm. I used to watch mares from six at night till about ten, and do my homework there, when I was a kid.”

He smiled broadly recalling his time working with a bay yearling a few years back, a feisty daughter of No Matter What. 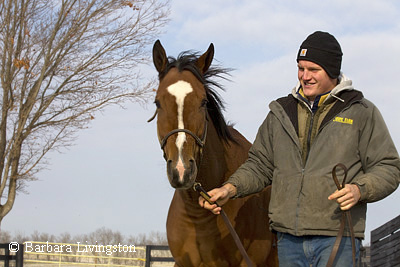 “Rainbow View and I used to have some good battles in the paddock. When you turned out the babies, she would drag people around in big circles. I was pretty good at holding onto the scrappy foals because I was still playing sports then. We had a lot of fun together,” he laughed.

Like his father and the rest of his family, Arthur is unusually grounded with a love of the land and the horses.

“I think we’ve all kind of lost touch, with cell phones and stuff, but not all people my age are crazy,” he said. “People are just unfocused. I live out in the country and try not to watch television. It’s been kind of tough to deal with as a young person, but the farm life is good, and the horses are good because (you know the saying): there’s something about the outside of a horse that is good for the inside of a man.”

Just before we left, he smiled and added, “Hopefully, one day I’ll be an old man full of quotes, like my Dad.”