AIR FORCE BLUE, held in the highest regard by his all-conquering connections, showed just why they think he is so special when powering to victory in Saturday’s Group 1 Dewhurst Stakes at Newmarket, a race in which the previously unbeaten Emotionless, billed as Godolphin’s big blue hope, finished last of the seven runners.

The race, one of the world’s signature two-year-old contests, was billed as a clash between racing’s two superpowers with Air Force Blue running in the colours of Coolmore supremo John Magnier’s wife Sue and Emotionless sporting Sheikh Mohammed’s royal blue Godolphin silks.

However, the much-hyped humdinger did not materialise as Air Force Blue – rated the best two-year-old he has trained by Aidan O’Brien – shot clear under Ryan Moore to record his third top-level triumph, while Emotionless flopped, finishing last.

Sent off the 4-6 favourite, Air Force Blue, now hot favourite for next year’s Qipco 2,000 Guineas, had won the Phoenix and Vincent O’Brien National Stakes and confidence in his camp was sky high he would add his name to the illustrious list of Dewhurst winners, which includes Nijinsky, Mill Reef and Frankel.

He was settled in midfield by Moore as Adventurous set the pace in front. Emotionless, trained by Charlie Appleby, tracked his chief rival under William Buick, but could not match the War Front colt’s acceleration in the final two furlongs.

Picking up really smartly, Air Force Blue quickened to beat Massaat by three and a quarter lengths with Sanus Per Aquam – aiming to give trainer Jim Bolger his sixth Dewhurst win in ten years – third.

Moore, who teamed up with O’Brien to win the Dewhurst on Beethoven in 2009, was hugely impressed.

He said: “It was a brilliant performance. I rode him on Irish Guineas day and he won first time, but he was a big-framed horse and got beat in the Coventry as he hadn’t developed yet.

“The improvement he’s made – it’s the first time I’ve sat on him since June – he’s really strengthened and developed.

“I’m struggling to think of any better two-year-olds I’ve ridden and there felt like there was plenty more to come.”

O’Brien, winning the Dewhurst for the fourth time after Rock Of Gibraltar, Beethoven and War Command, completed the big-race double at Newmarket’s Future Champions Day fixture after Minding struck in the Fillies’ Mile on Friday.

Her performance had Moore purring, but O’Brien knew something even better lay ahead.

He said: “We’re delighted and were very happy after yesterday because Ryan had come in and said of the filly he’d ridden nothing like her. We were able to say, ‘wait until tomorrow, Ryan’.

“The reality is the filly would lead this horse halfway in his work.

“Everyone has been over the moon with him and he’s been so impressive. Joseph [O’Brien, Aidan’s son] got off him the last day and said he’d ridden nothing like him. He’s getting bigger and stronger. He’s something like we haven’t had before.”

Asked if Air Force Blue was the best juvenile he had trained, O’Brien, whose CV includes five Derby winners and seven 2,000 Guineas winners, added: “I’d say no doubt. The size of him and the scope and the way he travels. When you let him go he delivers. In February he was totally an unfurnished baby, but was head and shoulders above everything else.” 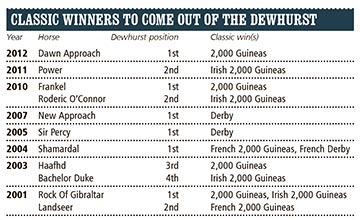