A 'whole new way to tell the story of the Thoroughbred'

After spending almost two hours touring Stone Farm in Paris, Kentucky, our small group was being led back through the main office when owner Arthur B. Hancock III happened to step out of his private office. In his excitement, guest Jeff Holleran turned to our guide Alex — who is also Arthur’s daughter — and asked, “Can I have my picture taken with him?”

In that moment, everyone smiled, and Alex quipped, “Well, you will have to ask him!” While taking the picture, Jeff was able to tell Arthur about how his great grandfather helped build the stone fences around the Hancock family’s Claiborne Farm many years ago.

It was a two-minute conversation that will last a lifetime for Holleran, and it shows the value of what Horse Country is trying to do.

Each season will bring different elements to tours as well. At Stone Farm, after admiring the stalls where the likes of European champion Air Force Blue and Kentucky Derby winners Sunday Silence and Fusaichi Pegasus were born, our group visited with a mare and her newborn foal. The chestnut youngster had arrived overnight, and watching the pair together was quintessential springtime in Kentucky. Later in the year, yearlings being prepped for auction are likely to be the star attraction. 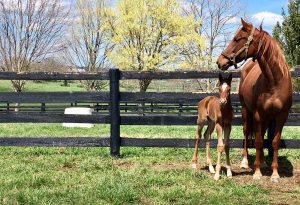 A Tapit mare with her newborn by Tale of the Cat at Stone Farm. Photo: Amanda Duckworth

“To actually get to step foot on a farm like this is amazing,” said Holleran, who is from nearby Elizabethtown. “I have probably done more tours than most people and will continue to go on them. When relatives or friends come to town, it is something to show them instead of just driving down the road and pointing. Being able to walk around on a farm like this, to see a newborn foal, is special.” 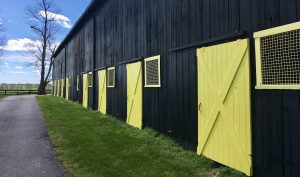 The foaling barn at Stone Farm. The closest stall is where Fusaichi Pegasus was born. Photo: Amanda Duckworth

For the folks behind Horse Country that is the ultimate takeaway. So often people in the horse business forget that what they see every day is something that is considered once-in-a-lifetime to an outsider.

“We hope they fall in love with the horses, the people and the land, but if they come away with a feeling that they are connected with the sport, that they have someone to root for, a team to follow, that’s huge,” said Hardy. “This is a whole new way to tell the story of the Thoroughbred — through these interactions with the people who care for the equine athletes from foaling barn to finish line.”